It is with great appreciation and gratitude to many people that such unique event took place this year in the village calendar. It is a tradition that the summer Ball takes place every two years which is a lovely is but does take quite a lot of organisation and orchestration. However, when Pat and Ros first ventured down to Cadmore Lodge on February 14th to begin plans, I think you’ll agree with me they carried through some excellent organisation and gave us a brilliant night to remember!

The group of men, Robin, Peter, Eddie, Mike Weston, Stuart, Geoff and Mark worked hard moving chairs, tables, cutlery, crockery etc back forth to set up at Cadmore, Friday and Sunday. The kitchen ladies and setting up ladies, Pat, Ros, Elaine, Ros, Janet, Janet, Polly, Chris, Jane and Cherry just worked tirelessly on food prep, laying tables and of course clearing up. We were grateful to Jess and James Harrison for their help in the kitchen and advise, they couldn’t have been more obliging, to the pudding club ladies, to our lovely group of waitresses from Tenbury High school, Muriel for selling raffle tickets, the generous donations raffle prizes, our saxophonist and ObScUrE our brilliant band! We were especially grateful to yourselves for coming along and being part of the evening, we hope you have fond memories of a special evening in June in 2018!

We were treated to a splendid B.B.Q and games evening, on Saturday 14th July. This was by kind permission of Ros and Paul Bayliss at the Old Vicarage Garden, a lovely venue for a fun & games and enough shade to enjoy a cool bar and well worked B.B.Q supper.

A very happy crowd attended and a great time had by all. Thank you all for supporting. 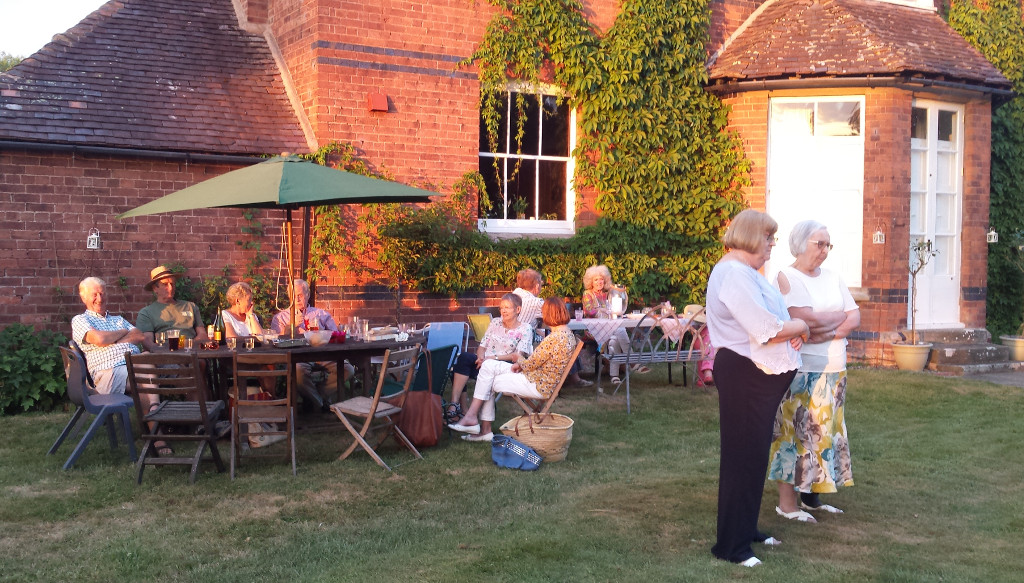 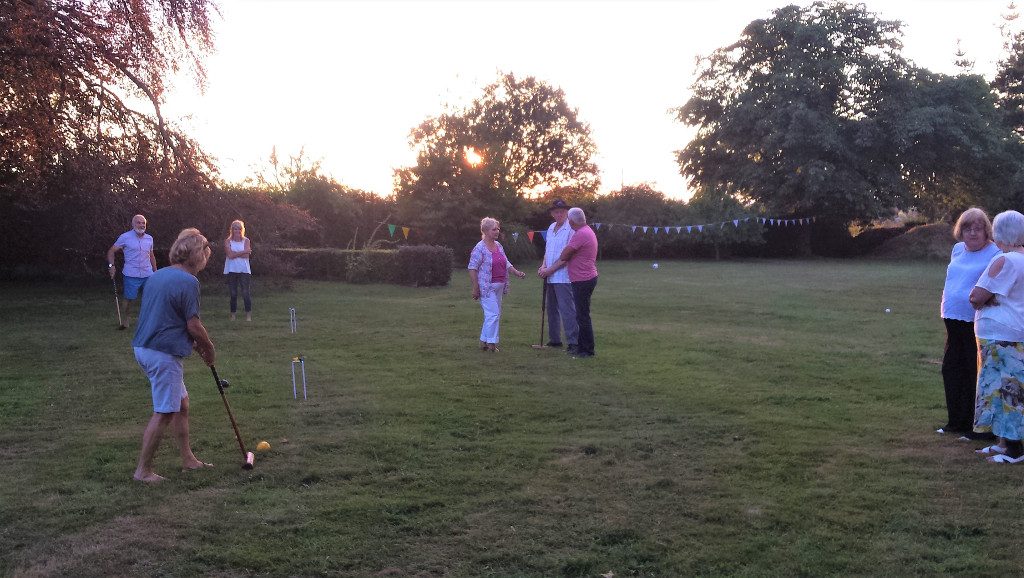 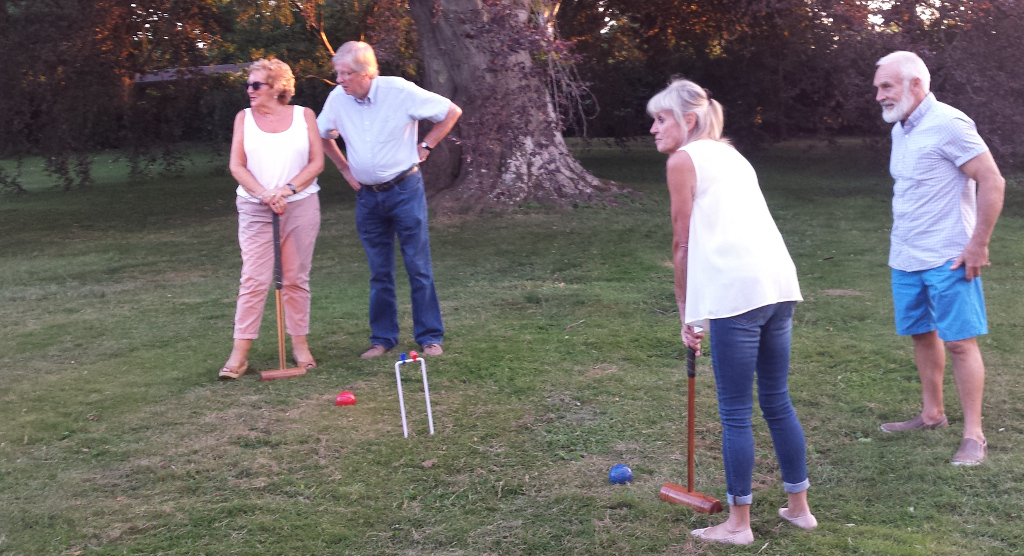 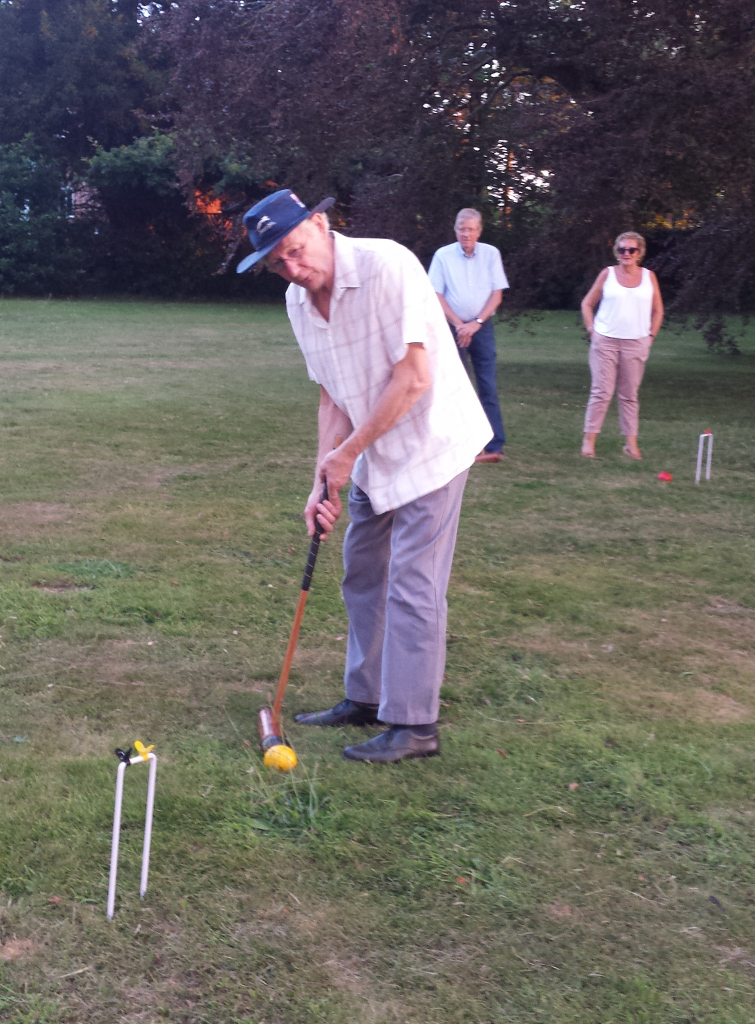 Approximately 75 friends and neighbours sat down to an excellent Spring Sunday lunch on 29th April which was well organised and cooked for us by Janet and Tony, Janet and Ken. Thankyou so much! Such hard work. A bar was at the ready – provided and looked after by Stuart and Geoff and an excellent team of committee and friends rallied well before and after in planning searing, tables and clearing away. It was lovely to welcome visitors and a welcome surprise to sing happy birthday to Gwen who had come along with daughter Lucy and son John who were a little in the know!

Thank you also to Muriel for help with the raffle again, this boosted profits from the lunch in the region of £800. Well done to all. Spring went out like a lion because the following weekend we were rushing into the summer wardrobes and suffering from heat!

On the eve of the Royal Wedding of Harry and Meghan the village hall was filled with a buzz and sparkle on this lovely May evening. The weather has been its best this year, what a difference this makes to a gathering and the company was good fun.

Thank you to all who worked hard in setting the room up. Vernon and Geoff looked after the skittles and led us in a team game together with the excitement and climax of ‘Killer’.

We ere thrilled Margaret’s team won because they opened and shared the chocolates! At half time we enjoyed a delicious (luxury) ploughmans with thanks to Pat and Ros, and a good bar was run and provided for by Stuart.

Thank you to all for joining another good evening in the village hall, so good to see everyone wherever you are in the community.

What a very enjoyable social gathering! Having not played Whist for many years, and with only a hazy memory of the basic rules, there was a slight degree of hesitation beading up to the village hall. But there was no cause for concern. The emphasis was most certainly on playing for fun. And fund we had. A big ‘Thank You’ must go to Disk Fox for running the evening and to Janet Penn and Jane Yardley for providing the delicious half time refreshments.

It’s not every day you get to experience a live theatre production just up the road from where you live. So, it was decided we’d have a ‘Girl’s Night Out’, 3 generations; Nanna, Mum, me and sister.

I can honestly say Finding Nana was the most captivating theatre production I’ve seen. I laughed; sometimes loudly, sometimes quietly to myself. I cried, lots. What made Finding Nana particularly enthralling was the fact that it was an autobiographical production (I’m a sucker for a true story) told by a single actress using an extremely simple set – a bed. From the very beginning I was immersed in the story unfolding in front of me.

Jane and her Nana would holiday together every year on the Isle of Wight., As Jane grew up, Nana became increasingly forgetful and confused, developing dementia and eventually ending up in palliative care before her death. Jane is desperate to remember her Nana at her best but she’s plagued by the worst memories as they intermingle with the happy times. So Jane embarks on a memory tour of the Isle of Wight in an attempt to banish the memories she’s plagued by whiles also trying, heartbreakingly, to be closer to her Nana.

We all thoroughly enjoyed this theatre production. If you get the chance to see it, you really must; just remember to take a tissue (or two) with you.

It was the week before Christmas (give or take a few days)… and the St. Michaels Singers were behaving virtuously by offering rich entertainment for the village and its neighbourhood. Of course, this Christmas concert is well-established as a most happy and friendly event to start off the festive celebrations and its reputation is far and wide – I found myself talking with a gentleman from Orleton and there were many others present from Tenbury and the surrounding villages.

We were treated to a fine programme of singing, readings and dramatisations put together by the very resourceful and accomplished Jacqui Cable who was conducting her third (I think) annual concert. She let it be known that the contents had taken nine months from first conception, which struck a strangely familiar bell. The backbone of the evening was a sequence of medleys of both devotional and secular music ranging from Pearsall to Irvin Berlin that the choir addressed lustily and in fine harmonic style. There were a number of “swing” pieces, very well suited to the Singers’ sharp ear for syncopation: “Anything Goes” which closed the first part and the “Forest Gump Medley” that opened the second were two such high points of communal singing. But there were also individual renditions that were really quite outstanding. The sequence of vocalists in “7 Joys of Mary” and both Jacqui and Geoff in “Mary, did you know?” are two points I particularly remember, but there were several others also that delighted at the time.

I relished the introduction of brand new pieces – the lilting, rhythmic “Italian Pipers Carol” and “Away in a Manger” sung in unison to a beautiful alternative melody. Relished too on quite a different tack certain old muckers of mine doing their barbers’ quartet stuff, led by Brian, with the very definitely secular “Dinah won’t you blow” and an emotive “Silent Night”.

Then there was the spoken word. Ros contributing a personal touch with (surely?) her own poetic Christmas Message, Anne Fox giving her all to creating the wolf in a Roald Dahl ditty (excellently delivered by Vicky) and making lateness on cue a theatrical triumph, Pat becoming a sour complaining Mrs Scrooge in another command reading (where did that characterisation have its origins…Geoff?) and Chris B’s “Birth of a Tradition” that contained the best joke of the evening by far. And I’m sorry about that one, Mike J.

Finally, Santa Claus himself appeared in red plush and a wondrous fleece of white hair and beard concealing, some said, Mike E. and drove us all on a rollicking “Jogging along with Mi Reindeer.”

Two matters of organisation for the evening that made very good sense were firstly, this concert included more individual soloists than any I can recall so that we were introduced to many distinct capabilities and secondly, that the male voices were placed centrally in the body of the choir – which lent them a more robust and concerted sound.

Mike Jordan performed his part as compere with suitable panache (and jumper) even if he needed the help of a nine-year old boy for his punch-lines. Quite properly he gave a round of thanks to all who had helped with furnishing the hall, the catering, bar and raffle and in very much particular to Kath Ainsworth, who had slaved away as pianist like an automaton throughout the evening and who was effectively the mainspring of the entire complex machine.

So hearty thanks again to everyone for a most happy evening that sent us off in high spirits to our baking, stuffing-doing and vegetable prepping for that other major event to come. (And thank you also, Mike, for letting me sing the Third King – something I have been waiting to do for the past fifteen years!) 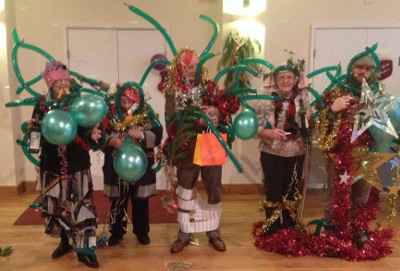 What an astounding success New Years Eve was at the Village Hall. We laughed and chatted all night; played silly games, that were won consistently by team Jordan and Snow White, with a little bit of competition from team Mitchell.

A special thank you has to go to the providers of our hot food. It was so delicious with all tastes and allergies catered for. Each person brought a different pudding which gave us a huge variety to choose from. It was a mouth wateringly wonderful buffet .

Stuart was Master of the Games,dressed in a cows costume, with a blue baseball cap! Ah well it was New Years Eve.

Jennie from the Black Country came up with several quizzes which made sure that our brain cells were working despite the alcohol we consumed .

The four hours to midnight passed so fast, which says so much about the entertainment that had been laid on. It was almost disappointing to have to go home.

Thank you very much to all of you that worked so hard to give us a amazing end to the Old year and a warm start to the New.

Happy New Year to you all.